Faces of Israel: Shaltiel Family and the ILAI Fund

Albert and Yael Shaltiel struggled for years with infertility. But rather than harping on their own tribulations, they devoted themselves to children with serious medical issues – an initiative that culminated with the establishment in 2005 of the Ilai Fund, a nonprofit for the benefit of unfortunate children Ilai Shaltiel spends a lot of time interacting with children who benefit from the Ilai Fund.

Finally blessed with a healthy son and, nine years later, a beautiful daughter, they nonetheless continue full force with their charitable work on behalf of youngsters in need.

Albert and Yael are Iranian Jewish immigrants to Israel – by way of New York and Los Angeles – living in the city of Modi’in.

Before the birth of their son, the Shaltiels had considered adoption. However, after coming into contact with numerous medically challenged children, they felt uncomfortable choosing only one child to care for among so many in need.

Thus they began raising money to provide medical equipment and diverse therapies for these children and created the Ilai Fund, named after their son Ilai, who at the age of nine has already has become an integral contributor to the cause, meeting regularly and interacting with the children supported by the Fund.

The children who benefit suffer from physical, emotional and mental disabilities, including those wounded by accidents or acts of terrorism. The Ilai Fund assists those whose financial situation prevents them from receiving the proper care to meet their children’s needs.

According to the Fund’s website, the staff is “always available to our children, 24 hours a day, every day. We have a strong will and desire to make their lives easier whenever possible and as quickly as possible.”

A major focus is helping orphans and single-parent families – another hardship with which Yael empathizes, having been raised without a father. Indeed, it is all the more difficult for a single mother or father when a child has unique medical challenges.

The Shaltiel Family has Internalized the Need for Action

Albert had escaped from Iran; he succeeded only after a number of attempts, the second of which had landed him in prison, where he was tortured.

Instead of erasing the painful memories and focusing on themselves only, the Shaltiels seem to have internalized the need for compassion and activism. Not only do they continue their philanthropic work, but they remain grateful to their Iranian family and friends – most of them in the United States – who were the main supporters of the Ilai Fund, especially Ben and Bita Nehmadi. Ilan Fund founders Albert and Yael Shaltiel in March with their nine-year-old son and newborn daughter.

“Together with our other ‘Donating Angels’, they are an integral part of the family,” Albert stated.

The Ilai Fund recently honored the Nehmadis for their outstanding commitment.

Having escaped from Iran merely days before the Islamic Revolution in 1979, Ben Nehmadi arrived in New York, where he used his strong work ethic, thirst for education and profound faith to gain a foothold in the real estate market. Distressed by the striking combination of incredible wealth and desperate poverty that he observed in New York, he decided then and there that he would do whatever he could to help those in need.

After founding the Republic Investment Company and becoming highly successful, Nehmadi remained true to his word.

“I reconnected with Albert eight years ago and heard about his work with sick children in Israel,” he said. “I knew that I wanted to do what I could to help.” 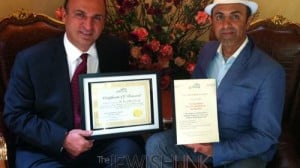 The Nehmadis keep up to date with the work of the foundation during their frequent visits to Israel.

“Albert and Yael are people who are doing God’s work, but quietly and humbly, and it is a true honor to be involved with their efforts,” Ben Nahmadi said. “Given Albert’s incredible background and his ability to work so hard, I know that when I support this Fund it will definitely lead to better lives for all involved.”

The children benefiting from the Ilai Fund are not the only winners in this endeavor. By making such a meaningful difference in the lives of children and helping them to flourish, Albert and Yael Shaltiel, along with their ‘Donating Angels’, are building a healthier society and a better future for the State of Israel.